There’s a variety of display panel out there and even more on the way. But looking at all the different types of panels can be baffling. They come in various acronyms, and many of those acronyms are confusingly similar. How do LCD, LED and OLED compare? What about the different types of LCD panels? And how do these different technologies impact your viewing experience for things like gaming? To help, we’ve created this guide so you can gain a firm understanding of today’s display panel technology and which features really matter. 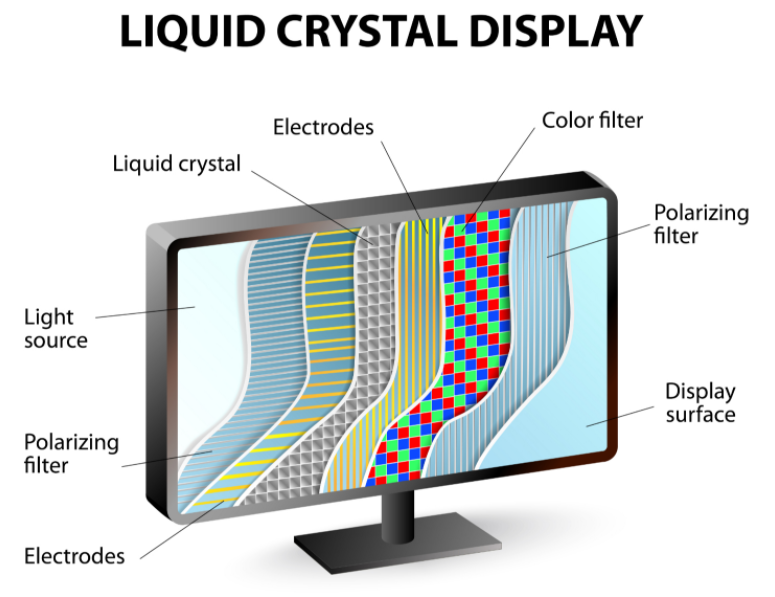 The first type of panels we’ll cover are LCD (liquid crystal display) panels. The main thing to understand about LCD panels is that they all use a white backlight (or sidelight, etc.). They work by shining a bright white light into your eyes, while the rest of the panel is for changing this backlight into individual pixels. 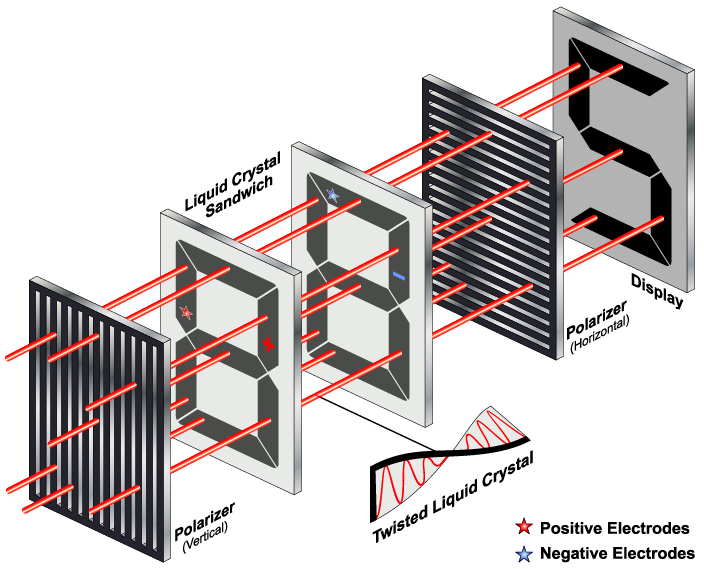 LED stands for light-emitting diode. You’ll often see LCD panels that are LED, but that doesn’t necessarily mean much when choosing an LCD. LED is just a different type of backlight compared to the old cold cathode backlights. While you could congratulate yourself on not using mercury, which is found in cathodes, at this point all LCDs use LED backlights anyway.

The second thing to understand is that LCDs take advantage of a phenomena known as polarization. Polarization is the direction in which the light wave is oscillating, or swinging back and forth at the same speed. Light comes out of the backlight unpolarized. It then passes through one polarizer, which makes all the light oscillate the same way.

Now you have an on and off (and between) switch for light. To produce color all that’s needed is three color filters, red, green and blue, that block all light other than that color from coming through. The difference between different types of LCD panels is mostly in how this in-between liquid crystal part works.

So without further ado, here the types of LCD panels:

TN stands for twisted nematic.  These were the first LCD panels, and the tech behind them dates back to the 1980s. With TN panels, once the backlight is polarized into one direction, it enters the liquid crystals. Depending on the on or off (or in between) state, this crystal can twist polarization of the light 90°, thus matching the orientation of the second polarizer and letting it through. Or, the crystal can align itself with the first polarizer, and, subsequently, the second polarizer will block the light. 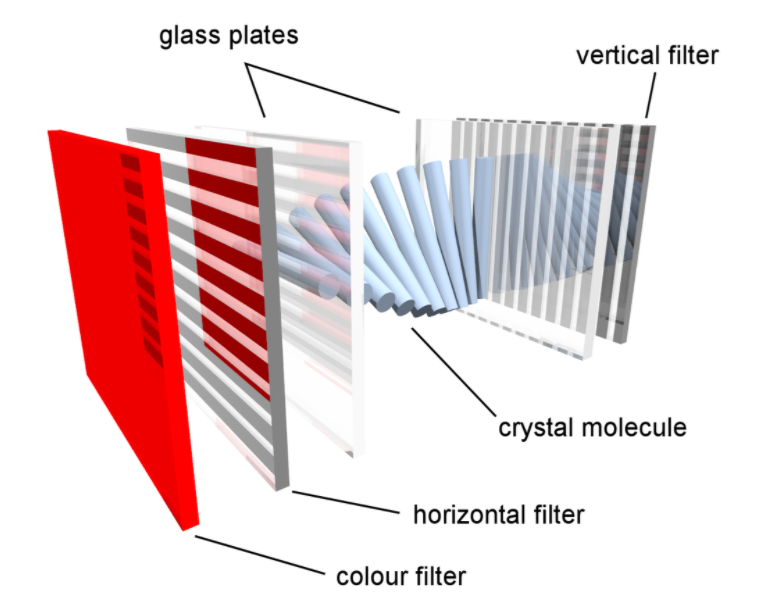 This design allows for fast response times (the time between the panel getting the frame it’s supposed to display and actually displaying it). It also allows for fast refresh rates. Consequently, TN panels are the only 240 hertz (Hz) gaming monitors available right now.
TN panels are cheap but suffer from poor viewing angles due to the “twist” only being aligned in one direction for viewing the panel straight on. They can also have poor color and contrast due to this twist mechanism not being the most precise or accurate.

VA stands for vertical alignment, again referring to the crystal alignment. These came about in the 1990s. Instead of using liquid crystals to twist a light’s polarization, a VA panel’s liquid crystals are aligned either perpendicular (vertical to) or parallel (horizontal to) the two polarizers. In the off state, the crystals are perpendicular to the two opposing polarizers. In the on state, the crystals begin to align horizontally, changing the polarization to match the second polarizer and allowing the light to go through the crystals.

This structure produces deeper blacks and better colors than TN panels. And multiple crystal alignments (shifted a bit off axis from each other) can allow for better viewing angles compared to TN panels.

However, VA panels come with a tradeoff, as they are often more expensive than TN panels and tend to have lower refresh rates and slower response times than TN panels. Consequently, you won’t see quite as many VA panel gaming monitors.

IPS stands for in-plane switching. These panels debuted after TN panels in the mid-1990s. The crystals are always horizontal to the two polarizers and twist 90° horizontally to go from off to on. Part of this design requires the two electrodes (which apply current to the liquid crystal to change its state) to be on the same glass substrate, instead of aligned with each other on the sandwiching glass substrates above and below the crystal (as in other types of LCDs). This, in turn, blocks a bit more light than both TN and VA panels.

IPS panels have the best viewing angles and colors of any LCD monitor type, thanks to its crystal alignment always lining up with the viewer. And while they don’t offer as fast a response time or refresh rate as TN panels, clever engineering has still gotten them to 144hz, and with nice viewing angles you’re not necessarily going wrong with an IPS gaming panel.

However, they also tend to be a bit less bright due to their design blocking off a bit more of the backlight.

Motion blur/ghosting can be a result of how long an image takes to switch from one to another and how long an image is displayed on screen (persistence). But both of these phenomena differ greatly between individual LCD panels regardless of underlying LCD tech. And both are often better controlled by higher refresh rates, rather than clever panel engineering, at least for LCD displays.

Choosing an LCD panel based on underlying LCD tech should be more about cost vs desired contrast, viewing angles and color reproduction than expected blur, or other gaming attributes. Maximum refresh rate and response time should be listed in any respectable panel’s specs. Other gaming tech, such as strobe, which flashes the backlight on and off quickly to reduce persistence, may not be listed at all and is not part of the underlying type of LCD used. For that kind of info you’ll have to check the detailed reviews here on our site.

And for more helpful advice on picking a PC monitor, be sure to check out our monitor buying guide.

OLED, or organic light emitting diode, panels, are different from LCDs. There are no polarization tricks here. Instead, each pixel (or subpixel of red, green, or blue) lights itself up as a voltage is applied to a giant complex molecule called, yep, an organic light emitting diode. The color emitted is dependent on the molecule in question, and brightness is dependent on the voltage applied. OLEDs can reach HDR brightness because their molecules put out the right colors to begin with without being blocked.

Due to its approach to color and brightness, OLEDs have great contrast ratios. There’s no need to block a backlight, so there’s no worries about light bleeding through. Blacks are very black, and colors look great. OLEDs can also strobe, or flash off and on quickly to lower persistence. They can also use a trick called rolling scan.This turns blocks of the screen on and off one at a time, from top to bottom in a roll. This is all done as the image is sent to the screen, which cuts down on persistence blur a lot. This is why every major VR headset that can afford it uses OLED panels today.

OLEDs can even be flexible, so look for them to show up in tomorrow’s promised bendable and foldable phones and tablets.

Unfortunately, that’s where the advantages of OLED end. Refresh rates of OLED panels have never surpassed about 90Hz. And they’re quite expensive. A large part of that $1,000 iPhone X price is due to its OLED display. The current molecules used in OLEDs also degrade relatively quickly over time, especially those used for the color blue, making the screen less and less bright.

OLEDs were also supposed to use less power than LCDs, but newer, giant OLED molecules that take less voltage to turn on have yet to appear. And while molecules covering the colors of the P3 HDR gamut are out today, those covering the larger BT.2020 gamut have yet to be found commercially. So OLEDs, while once promising and seemingly the future, have yet to live up to that promise.

A relevant question: If our fastest gaming displays are 240Hz TN panels now, just how fast do we need to go anyway? Well, a 2015 study places maximum human perception at 500Hz. So from that perspective, we’re halfway there. But that’s halfway there with today’s HDR, and not in lightfield 3D, or other possible advancements. And mobile devices could always use displays that take up less power.

In other words, in order to get fancy 3D effects, or much higher brightness, or any other desirable features, a different, new type of panel may be required. MicroLED tech is one such technology; think of it as OLED without the organic part and with the potential to improve contrast, response times and energy usage over standard LED panels. If you want to know more you can go here, but the real takeaway is that MicroLEDs work almost exactly like OLEDs.

Samsung, LG and Apple are currently researching MicroLEDs, but only time will tell if it becomes a popular standard.

We are located in Huadu district, Guangzhou City,15 minutes by car from Guangzhou Baiyun International Airport. Our factory has passed the ISO9001:2015 Quality Management System.